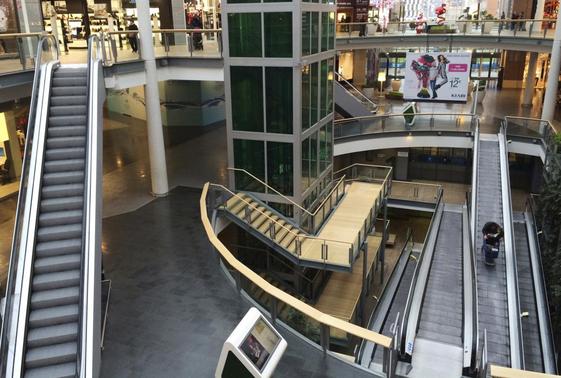 (Reuters) – In the middle of 2008, construction began on France’s biggest mall project in a decade. Weeks later the U.S. credit and housing crisis slammed into Europe, and “Le Millenaire”‘s promoters braced for a big hit to their hopes.

Reality was even harsher.

In 2014 neon placards gleam from the top of the completed mall in working-class Aubervilliers. But several of the names they advertise – like high-street fashion stores Desigual and OVS Industry – are no longer to be found inside. One in six of the mall’s stores shut down because the shoppers failed to come.

The 140-store center, dubbed a “ghost mall” by some visitors, epitomizes the current state of France: high expectations stalled by low spending, dispirited entrepreneurs and a lack of growth prospects since GDP slumped 2.9 percent in 2009 and failed to really turn around since.

While from central Paris the beleaguered government calls on Europe to abandon its focus on austerity to boost investment and growth, Le Millenaire, in its northeastern suburb, is now targeting the only healthy retail business there is — discount stores that appeal to cash-strapped shoppers.

Consumer spending contracted by 0.9 percent in October after falling 0.5 percent in September, constrained by unemployment stuck above 10 percent.

The future of Le Millenaire and similar projects now depends on whether President Francois Hollande can deliver on policies aimed at reviving consumer spending – for decades a key motor of growth in the euro zone’s second-biggest economy.

A series of recent reforms have sought to boost the disposable incomes of ordinary French households.

The 2015 budget scraps the lowest band of personal income tax, a measure intended to put a total 3.2 billion euros ($4 billion) back into the pockets of six million taxpayers.

And a bill presented by economy minister Emmanuel Macron to cabinet earlier this month lowers prices in essential services — such as legal fees paid on moving home — in an attempt to increase the spending power of the average French household.

But while independent economists have welcomed what they see as an attempt to revitalize the economy, many are cautious about the impact.

Societe Generale economist Michel Martinez estimated that all the measures in the Macron bill — which also includes a loosening of laws on Sunday trading — would at best raise gross domestic product by 0.5 percent over 5-10 years.

“Everyone knows this will not change the face of France,” he noted.

Back at Le Millenaire, on a recent Wednesday afternoon when the schools are closed and the Christmas shoppers should be out, the mall was eerily quiet despite its glitzy lighting.

“It’s utterly dead. I can’t find the words to describe this mall,” sighed Axelle Yaba, 23, a hairdresser perpetually tidying up her salon to keep busy. She had just four clients that day.

When it opened in 2011, Le Millenaire — jointly owned by real estate firms Klepierre and Icade –hoped for up to 14 million visitors a year. It is only bringing in 6 million.

“How long this will last, I have no idea.”

FIGHTING FOR A SLICE

In the meantime, Le Millenaire is facing reality and going downmarket in a bid to attract what little spending is currently available — French households’ Christmas spending is set to fall 4.5 percent this year, according to Deloitte.

This year the mall took in Chaussea, an affordable shoe retailer selling winter boots for under 40 euros and Tati, a cut-price chain with a distinctive pink-and-white check print that is selling 15-euro artificial Christmas trees, children’s toys for under 10 euros and 99-cent wrapping paper.

“French consumption is like a pie that’s already been divvied up and you have to fight to snatch a new one,” he said. “Mall owners now realize they’re better off having downmarket stores that draw crowds rather than high-end ones that don’t.”

Klepierre is optimistic that the Millenaire will be boosted by a government plan to pull Aubervilliers and other depressed Parisian suburbs into a “Greater Paris” zone earmarked for urban regeneration, notably through a revamp of rail links and other transport infrastructure.

Meanwhile nine percent of the mall’s space is still vacant. Klepierre would not disclose how much rent that represented, only saying the mall’s performance was below its portfolio’s average.

Amid the discounts and empty aisles, one mall visitor was happy, however.

Nursing her baby girl, 28 year-old Awa Cissokho said: “I like it. It’s quiet and spacious, which is great when you have a stroller.”