The Vegas Strip Steak joins the flatiron and other new cuts from rough parts of the steer that will fetch higher prices than burger without breaking the bank for shoppers. 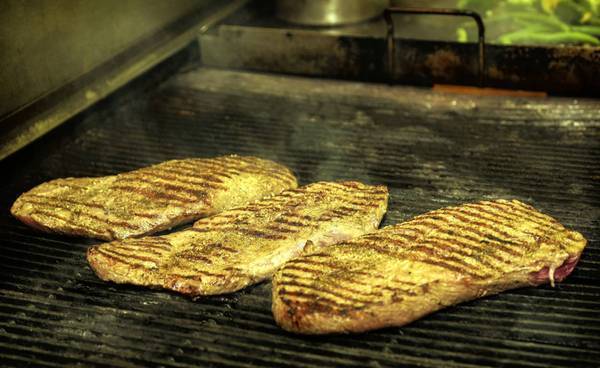 For generations, beef shoulder was a blue-collar cut of cow, fit for the meat grinder or crockpot but not much else.

But where others saw pot roast, Tony Mata saw potential.

Mata is a Dallas meat scientist whose mission is to find hidden gems in rough parts of the steer. He and a team of researchers came up with the industry’s newest steak by mining the muscle under the shoulder blade for a tender pad of flesh.

Unveiled last year at a trade show, the meat is starting to land on restaurant menus. At about $6 a pound, it sells for twice the price of hamburger and has a catchy name to boot: the Vegas Strip Steak.

“People think I’m crazy trying to look for new steaks in an animal we’ve domesticated for thousands of years,” Mata said. “But as an industry, we’ve ignored all these other muscles. I truly believe there’s still two or three more steaks out there.”

Mata’s persistence is a testament to changing fortunes in the beef industry. U.S. per capita beef consumption has been falling for decades as consumers have shifted to lighter fare. Pricey prime rib and filet mignon have vanished from many American tables in a sluggish economy.

That has the beef industry scouring the animal for affordable delicacies — cuts that will fetch higher prices than burger without breaking the bank for shoppers. Now steaks with names like ranch, petite tender, Denver and Sierra are popping up in meat cases alongside familiar names like sirloin and porterhouse.

“Any time you can make something steak-able, you’re bringing more dollars back to the carcass,” said Jake Nelson, a meat processing specialist at Oklahoma State University who worked with Mata on the Vegas Strip Steak.

Such efforts began in earnest more than a decade ago. That’s when the U.S. industry’s promotional arm, known as the Beef Checkoff, funded research to find cuts tasty and tender enough to turn into inexpensive steaks.

Researchers at the University of Nebraska and the University of Florida studied more than three dozen muscles, focusing mainly on the shoulder or chuck, as well as the round, which is the back leg. They measured tenderness, trimmed the gristle and spent hours in test kitchens cooking up the results.

Top-quality steaks have traditionally come from the steer’s midsection, which is supple and easy to butcher. Chris Calkins, a University of Nebraska professor who worked on the project, said skepticism abounded among meatpackers that anything valuable would be found in the animal’s ropy front and behind.

But in a portion of the chuck known, unappetizingly, as the shoulder clod they found a large pocket of marbled meat. All it required was some nimble knife skills and suddenly there were the makings of an elegant steak. They dubbed it the flatiron because it resembled an antique steel clothing iron.

Retailing for about $6 a pound, the flatiron is now America’s sixth most popular steak, overtaking the porterhouse last year. And it has changed the economics of beef. Experts estimate that it has helped add $50 to $70 to the value of the average steer — impressive considering that an entire animal goes for about $1,600.

The flatiron has enabled restaurants to serve a hearty steak at relatively affordable prices. The Tender Greens restaurant chain offers a sliced flatiron plate with side dishes for $11.

Although the flatiron is the runaway sales leader among the newer cuts, nothing can beat the recently introduced country-style ribs for sheer imagination. These “ribs” are boneless — and they aren’t found near the animal’s rib cage. Instead this meat is sliced from the chuck.

Erik Oberholtzer, co-founder of Tender Greens, said he slow-cooks these faux ribs for hours over hickory wood, then tops them with a homemade chipotle barbecue sauce.

“They come out soft, juicy and fall apart without the mess of bones,” he said.

Other industry innovations amount to little more than smaller portions. Take the New York strip fillet. It’s essentially a typical 1-pound New York strip steak split in half. That might seem like cheating, but beef marketers defend it as good value for consumers on a budget.

“They’re still enjoying a high-quality steak but at a lower cost,” said Trevor Amen of the National Cattlemen’s Beef Assn.

The Great Depression gave rise to the lowly cube steak, a slice of top round or top sirloin so tough that it needs to be pulverized with a mallet to make the meat fit to chew.

Still, getting consumers to embrace new cuts like the petite tender has been anything but a slam-dunk.

“I’ve never heard of them,” Justin Nathaniel, 25, who was grocery shopping recently at a Hollywood Vons, said about the new cuts. “I prefer the porterhouse. I want lots of marbling.”

Some meat experts are dubious too. They say the beef industry is trying to dress up second-tier cuts with fancy names.

“We already know about all the good stuff,” said Lou DeRosa, a third-generation butcher at Marconda’s Meats in Los Angeles. “Those new cuts are pretty rough.”

But other industry veterans say the value steaks are a nice addition to their lineups.

To peddle the ranch steak to his customers, he brines the meat in a salt solution to ensure that it stays moist. A petite tender is roasted to a pink center and sliced into medallions like a pricey tenderloin. When pushing the Denver, he says the key is to grill it medium or medium-rare to prevent it from toughening.

Lobaugh said most of his clients happily gobble down the samples. But getting them to order it for their supermarkets and restaurants is another story.

“A lot of these chefs in big chains and accounts are real skeptical,” he said. “They’ve been trained to work with the traditional cuts, and to come in with something new just takes them out of their comfort zone.”

Food scientist Mata promotes his Vegas Strip Steak as a flavorful alternative to the New York strip, but at half to one-third the price. He has trademarked its name and launched a quixotic attempt to patent the butchering process needed to extract the steak from the shoulder blade.

At 63, the native of San Miguel de Allende, Mexico, says he’s not done yet. Mata is still exploring the beef shoulder and back in search of the next big thing.

“Get back to me in two years,” Mata said. “I’ll have another steak by then.”