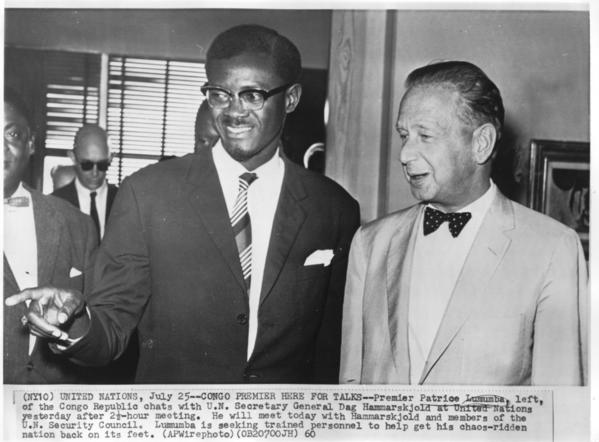 It was 1961 and the Cold War battle for influence in newly independent African states was sharply focused on the Congo.

The first elected leader, Prime Minister Patrice Lumumba, had been kidnapped, tortured and killed by a military junta earlier in the year. With the anarchic new state falling under the sway of the Soviet Union, Katanga politician Moise Tshombe cleaved his province and its wealth of uranium, copper and cobalt mines into a separate state supported and protected by former Belgian colonial masters.

U.N. Secretary-General Dag Hammarskjold was reportedly on the brink of reunifying the two Congolese factions when his plane crashed on approach to Ndola, Northern Rhodesia, where he was to get Tshombe’s signature on a truce.

With an array of powerful interests working against any unified Congo aligned with Moscow, conspiracy theories have thrived through the 52 years since the U.N. chief’s death. And they have been revived and invigorated by a report released Monday that recommends reopening the inconclusive 1962 U.N. investigation of the plane crash.

The 61-page report of the Hammarskjold Commission, a panel of prominent international jurists, brings to light the probable existence of “significant new evidence” that would provide conclusive proof of whether the plane was shot down by a second aircraft reported by numerous witnesses to have been in the vicinity just before the crash.

But the vital evidence that could confirm or finally rule out foul play — tape recordings of communications with the doomed plane and among those monitoring the diplomacy and superpower wrangling around the Congo — resides with the U.S. National Security Agency, which continues to classify the materials as “top secret.”

There were many who opposed Hammarskjold’s peace mission. A Congo state unified and under Marxist rule was an unwelcome development for European mining interests worried that their investments would be nationalized. Nor did Washington relish the prospect of the Soviet Union having access to the world’s largest deposits of uranium in the midst of a nuclear arms race. And Britain, then the colonial power in white-minority-ruled Northern Rhodesia — today’s Zambia — feared the example of emancipation and majority rule on its African possession’s border.

“With the large commercial interests which rode on Katanga’s bid to secede from the newly independent Congo, it is unsurprising that the death of Dag Hammarskjold was regarded in some quarters as too convenient to be an accident,” the commission noted.

The Hammarskjold Commission and the National Security Archive, an independent documentation research center in Washington, both submitted Freedom of Information Act requests for recordings or documents related to communications with the plane as it approached Ndola just after midnight on Sept. 18, 1961. The researchers also sought any reference in the intelligence agency’s records to one plane firing on another on the night of the crash.

The NSA replied that it had located three documents “responsive” to the researchers’ inquiries but that two were still under seal despite the agency’s policy of declassifying records after 50 years. Those two have been barred from release by an Obama administration executive order, as their disclosure “could reasonably be expected to cause exceptionally grave damage to the national security,” John Prados, the senior fellow at the archive who handled the FOIA queries, said of the response he got from the NSA.

The third document “originated with another government agency” to which it has been referred, said archive researcher Mary Curry, reading from the NSA’s Aug. 20 reply. But the NSA didn’t identify the agency, and no other response to the FOIA requests has been received by the commission or the archive, Curry said.

U.S. intelligence agencies claim “sources and methods” exemptions from FOIA rules to prevent disclosures that could undermine how and from whom they gather information, Prados said. But he said he doubted any methodology in practice in 1961 would pose a risk to national security if disclosed today.

“The specific interception equipment, radios, techniques, communications channels used, the means of storing data in 1961 — all of them are obsolete now and long since abandoned by the NSA,” Prados said.

That leaves the conspiracy-minded to conclude that the danger posed by release of the materials would be to the intelligence agencies’ image and legacy, fueling new suspicions that the death of Hammarskjold wasn’t an accident.

The denied FOIA requests are on appeal, but there is no deadline for the intelligence agencies to respond. Prados pointed out that the archive’s past successes in getting material declassified have typically taken “years if not decades.”

The commission was launched by a British parliamentarian after the publication two years ago of Susan Williams’ probing book “Who Killed Hammarskjold?” Her account laid out the many questions left unanswered in three earlier investigations of the U.N. chief’s death.

The commission was asked to evaluate whether the U.N. would be justified in reopening its own 1962 inquiry in light of evidence now available. It responded with “a qualified but firm yes.” The legal experts also informed the United Nations that important new evidence “undoubtedly” exists that could prove or disprove whether Hammarskjold died in an accident or as a result of sabotage. It referred to the NSA and CIA practices at the time of intercepting communications from the intelligence agencies’ listening post in Cyprus.

Specifically, the jurists cited “persuasive evidence that the aircraft was subjected to some form of attack or threat as it circled to land at Ndola.” That possibility alone, the commission concluded, is “sufficient evidence to merit further inquiry.”

In a statement issued after the commission reported its findings in The Hague, Netherlands, the United Nations endorsed the call for a new probe, saying the world body for whom the Swedish diplomat worked “is among the most concerned in arriving at the whole truth of the circumstances leading to his death.”

The commission report resurrected a telling comment by former President Harry Truman to a New York Times reporter a day after the plane crash.

“Dag Hammarskjold was on the point of getting something done when they killed him,” Truman was quoted as saying. When pressed to say to whom “they” referred, Truman replied: “That’s all I’ve got to say on the matter. Draw your own conclusions.”