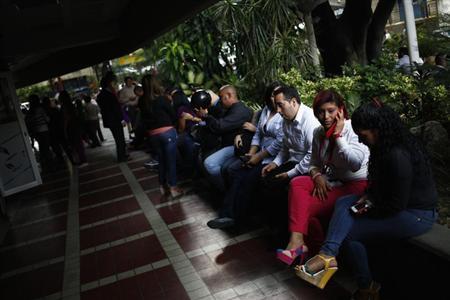 (Reuters) – One of the worst power outages in Venezuelan history has given a jolt to President Nicolas Maduro’s government and revived opposition accusations that its socialist policies and incompetence are wrecking the country.

Even though Venezuela’s 29 million people have endured sporadic blackouts since 2009, there was widespread shock at the extent of this week’s outage across two-thirds of the nation.

In the capital Caracas, which the government strenuously shields from rationing, the power went off throughout Tuesday afternoon, causing chaos on the streets.

“This isn’t the Third World, it’s the Fifth World!” griped student Marilyn Morales, 26, recounting how first she was trapped in underground transport, then had to lend a doctor her iPhone to use as a torch during an appointment in a dark clinic.

Some Venezuelans in the provinces watched the pain in Caracas with a measure of schadenfreude, saying it was about time the privileged residents of the capital, known as “caraquenos,” saw what they endured regularly.

Maduro, a 50-year-old former bus driver who narrowly won a presidential election this year after the death of his mentor and former leader Hugo Chavez, accused the opposition of deliberately sabotaging the grid to discredit him.

“Everything seems to indicate that the extreme right wing has revived its plan for an ‘electricity coup,'” he said, announcing a new Chavez-style initiative, Mission Electricity, to guard and improve the grid.

“I urge the electricity workers and people to help in the fight to protect the system from sabotage.”

Maduro has not yet provided concrete evidence of sabotage, and troops have been guarding important installations since similar accusations in the past.

Though Venezuela’s well-funded opposition movement certainly has its radicals, and plenty of machinations plagued Chavez’ 14-year rule, Maduro’s daily accusations of assassination and coup plots are straining credulity for many Venezuelans.

“The power cut shows once again the terrible incompetence of this government,” said Capriles. He was in the middle of a webcast with journalists – where electricity shortages were under discussion – when the lights went off on him.

Opposition politicians accuse officials of stealing money and failing to invest properly in state-run power company Corpoelec after Chavez nationalized the sector in 2007 during a sweeping state takeover of much of the economy.

Unlike other parts of the developing world, including political ally Cuba, Venezuelans had been unused to power failures due to the oil-exporter’s rich natural resources and strong hydroelectric facilities that generate two-thirds of electricity.

Chacon gave a technical rather than political explanation for Tuesday’s outage, saying a major line – No. 765 in central Guarico state that carries about 60 percent of national supply – collapsed when a protective metal shield fell on it.

But, in a nod to his boss, he did not rule out foul play.

Venezuela has a maximum generation capacity of about 28,000 megawatts, and demand that day was a below-average level of between 16,300-16,500, the minister said, denying accusations that the system could not cope with increasing needs.

The electricity sector is just one in a bulging in-tray of problems Maduro faces as he seeks to govern in the name of Chavez while also fixing some of his predecessor’s failings.

Most urgent is the economy.

Inflation, a decades-old problem predating Chavez, remains the highest in the Americas, at an annualized 43 percent, and is causing huge pain on the streets despite government subsidies that offer some protection to the poor.

Currency controls are creating myriad distortions and scams: the dollar is selling on the black market at six times the official price of 6.3 bolivars.

That has brought a resurgence of practices like “currency tourism” where Venezuelans travel abroad simply to take advantage of dollar allowances at the official rate.

In some cases, they buy a ticket to show as a requisite for the allowance, but then do not get on the plane. Or they fly to the cheapest possible destination, where someone will be waiting to “buy” their credit card allowance straight off them.

Restricted access to dollars for private businesses has also been a factor in persistent shortages of basics from toilet paper to flour that continue to irritate Venezuelans.

Maduro’s standing has not been helped, either, by some spectacular verbal gaffes.

In the latest, when alluding to the biblical story of Jesus miraculously providing loaves and fishes for a crowd of followers, he spoke of a multiplication of “penises” instead of “fishes”, muddling the Spanish words “penes” and “peces.”

Also last month, he raised eyebrows describing how he sometimes sleeps in the mausoleum where Chavez’s body lies.

How all this plays with the Venezuelan people is hard to read in polls that are often small or politically skewed.

But analysts say the nation remains roughly 50:50 for and against Maduro. Both sides dispute that, however, saying they are on top and will prove it at the December 8 municipal elections.

Beyond that, opposition leaders are looking towards a possible recall referendum in 2016 to try to end Maduro’s rule.