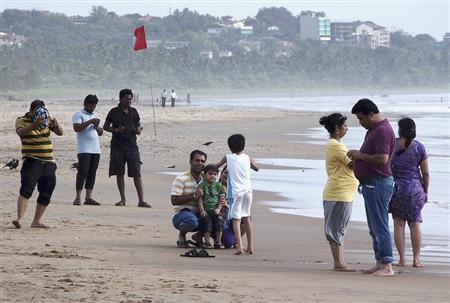 (Reuters) – The Indian rupee’s crash has swept away banker Nupur Sood’s dream of a holiday in Venice: instead the 35-year-old will settle for cold beers on the beaches of Goa on India’s west coast.

“We are pampering ourselves with a leisurely holiday but it will be domestic. I guess it is the only way to compensate,” said Sood, who plans to stay next month at the plush Grand Hyatt hotel in Goa, managed by Hyatt Hotels Corp, as a consolation for missing her holiday of a lifetime in Italy.

Sood is among India’s growing urban middle class, whose rising incomes over the past decade made holidays abroad affordable. However, the currency crisis in Asia’s third-largest economy is taking foreign travel beyond their reach and many are planning vacations in their home country.

While this will be a blow for domestic tour operators promoting overseas travel it will be a shot in the arm for India’s stagnant hospitality sector, which is reeling as high inflation and rising import costs eat away at profit margins.

Hotel groups, including Starwood Hotels & Resorts Worldwide Inc, Marriott International Inc and Hotel Leelaventure Ltd are seeing a spike in bookings for the winter season from domestic tourists and from foreign travelers, who importantly bring in foreign exchange.

“There is a lot of optimism in the hotel industry that, for both these reasons – it being cheaper for inbound travelers and a substitute for outbound travelers – we expect to have a good winter,” said Dilip Puri, managing director, India at Starwood Hotels.

The Indian rupee hit a record low of 68.85 against the dollar on Wednesday – down about 20 percent for the year – despite multiple attempts by the government to calm investors’ concerns. Emerging markets more broadly are being hit by capital outflows in anticipation of a reduction in U.S. monetary stimulus. The rupee recovered some ground on Thursday.

Its slide has contributed to a 35 percent surge in domestic tourism between January and June and a 15 to 20 percent fall in outbound tourism over the same period, the Associated Chamber of Commerce and Industry of India says.

About 15 million Indians normally take vacations overseas each year, so the shift is keeping millions of them and their spending at home. It also means they will not be selling rupee for foreign currency, offering small relief for the beleaguered rupee.

Meanwhile, the number of foreign tourists arriving in India between January and June also rose, 2.6 percent over the same period of last year, figures from the Ministry of Tourism show, and is expected to rise further over the holiday season starting in November.

For The Leela hotel in India’s beach state of Goa, it has been one of the busiest summers in several years and it is gearing up for an even busier winter season, which attracts Indian holidaymakers during festivals and foreign tourists drawn by a relatively warm climate.

“India has become a lot cheaper,” said Shridhar Nair, general manager at the Leelaventure group hotel in Goa, which saw a 10-12 percent rise in revenues between April and June from domestic tourists, and foreign travelers are expected to push up its winter bookings by 12-14 percent over last year, which would be one of the best seasons in years.

Nair said the highest demand in the summer was for ‘The Club’ rooms, which sell for 60,000 rupees a night ($890) and have plunge pools and butlers.

The most popular tourist destinations of Goa, Agra, Jaipur and Pune stand to benefit the most from the surge in domestic and foreign tourism.

They were the only major hotel markets in the country to report growth in revenue per available room (RevPAR), a measure of profitability, in the year ended March 31, a report by hotel consultant HVS says.

The Leela also hosted two weddings initially planned for Greece and Thailand and a corporate event scheduled in Kuala Lumpur – events that were forced to move because of the rupee.

“Our currency has fallen much more than the Thai baht and Maldivian rupee so from the currency devaluation point we stand to gain the most,” said Nair, who has seen a rise in enquiries from Russia, Europe and especially Britain, where travelers are taking advantage of the rupee breaching 100 against the pound.

Hoteliers believe that for the government this is a good opportunity to attract foreign currency from tourists, which would help close a record current account deficit that is much to blame for the rupee’s slump.

In 2012, the 6.6 million foreign tourists visiting India contributed about $18 billion in foreign exchange earnings, the highest since 1997. That amount is expected to rise more than 8 percent in 2013, the Ministry of Tourism forecasts.

For Carlson Rezidor Hotel Group, which operates the Radisson and Park Inn hotels among others in India, a rise in occupancy in winter will be a boon because – like several other chains – it has been hit by high inflation and import price rises.

“These are challenging times,” said K.B. Kachru, executive vice president, South Asia, at Carlson. “Operating costs have increased more than the revenue possibilities. It is becoming difficult to maintain margins. If the winter season is busy it will help keep margins in check,” he said.

Thomas Cook, India’s second-largest tour operator, has been hit hard by the increase in ‘staycations’.

Its outbound business grew just 15 percent in the April-June quarter compared with 44 percent a year ago. To tap demand for holidays at home, it has ramped up its domestic portfolio by offering more than 800 tours within India, boosting domestic enquiries for the winter season by 15 percent.

Other operators like Cox & Kings Ltd, TUI and Kuoni and online travel portals Yatra.com and MakeMyTrip Ltd are also introducing more domestic tours and offering discounts on places like Southeast Asia, South Africa and Australia, where the rupee has been comparatively more stable.

Banker Sood, who abandoned her 10-day trip to Italy just as the rupee crossed the 60-per-dollar mark, threatening to push her expenses up by 10-12 percent, is happy with her decision.

“I am glad I did it because look at the rupee now. When I went to the U.S. last year the currency did a similar thing and I overshot my budget,” she said. “From a planning perspective it completely throws your budget out, so this time it was a case of once bitten, twice shy.”