Mayor Ignazio Marino wants to rip up the road to create a vast archaeological park uniting the Roman Forum and other key sites in the heart of Rome. 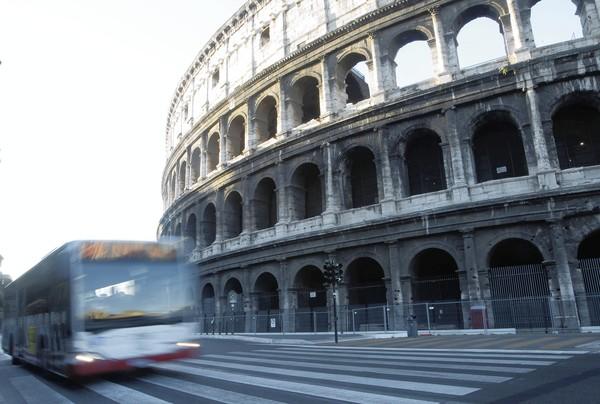 ROME — The newly elected mayor of Rome plans to radically redraw the map of the Eternal City by ripping up a busy road routed through a vast archaeological site by the fascist dictator Benito Mussolini.

Ignazio Marino, who trained and worked as a surgeon in the United States before returning to Italy to enter politics, said he planned to create “a completely new urban setup” in Rome by reuniting the excavated Roman Forum and the imperial forums of Trajan, Augustus, Caesar and Nerva in one massive archaeological park.

The “extremely beautiful” result, right in the heart of Rome, would double the number of tourists to more than 20 million a year, he told the Italian edition of the Huffington Post.

Marino has already shown he means business, barring private cars from the southern end of the road, known as the Via dei Fori Imperiali, which runs to the Colosseum, giving the amphitheater a breather from the barrage of emissions that erode its fragile stonework.

After the ban was introduced Aug. 3, police enforced a speed limit of about 20 mph for buses and taxis still using the road, issuing 31 fines on the first day.

Marino, a keen bicyclist, said he was “intolerant” of the cars that snarl the city’s narrow streets, adding that Romans need to cut back on their dependence on automobiles given that most commutes are less than three miles.

The car ban provoked furious protests from shopkeepers around the forums, who said their business would dry up, while 100,000 supporters of the clampdown joined an all-night street party to welcome the change.

On Sunday, emboldened by the backing, Marino announced he planned to remove the entire street, which runs from the Colosseum to Piazza Venezia and sits on an embankment laid across a vast slice of Roman history.

“I imagine that only a part will remain, a central section, maybe for bicycles or pedestrians, maybe for a tram,” he said, adding that a panel of international experts would ponder the work, which might take 25 to 30 years to complete.

Via dei Fori Imperiali was built by Mussolini as part of his bid to tap into the prestige of the Roman empire as he sought to build his fascist rule. Opening the road on horseback in 1932, he led a parade of World War I veterans along it.

Marino said the idea of ripping up the road came to him in 1988 when he was showing an American doctor around the site. “Here walked Julius Caesar, and Cicero spoke on this spot,” he recalled telling his colleague. “Who had the idea to build a road here?” came the reply.

An official at Italy’s Culture Ministry said archaeologists would find the 1st century Temple of Peace under the road near the traffic light halfway down. “Parts of the temple are to the right and left of the road, so the rest is under it,” said the official, who declined to be named.

A spokesman at Rome’s City Hall said the initiative could depend on the opening of a planned metro station at Piazza Venezia to improve public transportation. The station will form part of a new line set to service the historic center of Rome, which has already had two key stations in the center scrapped after it was discovered their exits would plow through archaeological remains.

Experts have promised that the recent excavation of a 900-seat arts complex built by the Emperor Hadrian in Piazza Venezia in the 2nd century will not halt plans for the station because the exit should be able to run along the complex’s original corridors.

The Culture Ministry official said Marino’s plan also could face red tape. “It turns out that Mussolini’s road is also protected by a preservation order, so that will have to be modified,” he said.

Marino said he was determined to push ahead.

“At Williamsburg, the colonial capital of Virginia, a whole city has been preserved, even if the majority of the houses were built of wood,” he said. “And if there were monuments in London or Paris as valuable as the Colosseum, would they have been reduced to the role of traffic islands?”