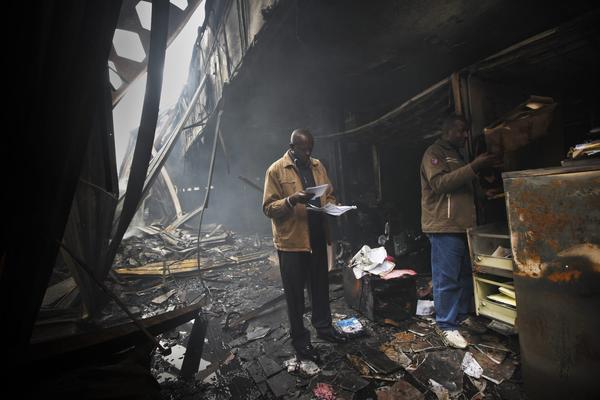 NAIROBI, Kenya — As Kenya struggled to contain the economic damage of Wednesday’s airport inferno, embarrassing reports emerged that members of emergency crews looted the deserted building as it blazed.

Kenya’s NTV reported that foreign exchange bureaus at Jomo Kenyatta International Airport in Nairobi had been broken into and robbed during and after the fire. News agencies said ATMs and a safe also were targets of looters.

The revelations raised the prospect that the blaze could have been contained more quickly and damage minimized had emergency response teams been focused on putting out the fire.

The blaze began at dawn and roared through the main airport terminal, destroying it.

News of the looting came as Kenyans were already smarting over the slow response by firefighters. Kenyan newspapers ran front page photographs of security officials responding to the blaze with plastic buckets. Others tried to fight the fire with handheld fire extinguishers, according to local news reports.

Kenyan officials rushed to get the airport functioning fully, and announced Thursday that full operations would resume at midnight, including international flights.

A team of detectives examined the airport building Thursday and interviewed overnight staff members in an effort to discover the cause and source of the fire. Kenyan news media aired various theories on the cause: an electrical wiring fault,   sabotage or an effort to destroy evidence by immigration officials who were running a racket to allow people into the country illegally.

Many reports suggested the fire began in the immigration area about 5 a.m.

President Obama called Kenyan President Uhuru Kenyatta to offer U.S. support. It was Obama’s first call to Kenyatta since his election in March. Kenyatta has been indicted by the International Criminal Court on charges of crimes against humanity, and the U.S. normally keeps those charged by the  ICC at arm’s length.

If the mood on social media in Kenya conveyed shock Wednesday, by Thursday it had turned to anger. Many called for the resignations of airport and emergency services bosses.

“We have huge, huge losses due to the closure of the airport. We are getting a lot of cancellations from our clients,” said Ben Ngunga, tour manager at Abercrombie & Kent Tours in Nairobi.

“If the situation is not checked immediately we are going to lose big as a company, and it will also mean a big economic loss for the country as whole,” he said.

According to Kenyan reports, the airport handles 4 million passengers a year.

Transportation official Michael Kamau said the VIP facilities normally reserved for heads of state had been put into service for ordinary travelers. He urged tourists not to cancel bookings.

He said travelers might experience delays and discomfort but authorities were working to ensure their security and bring the airport back to normal operation as soon as possible.

Eutychus Waithaka, chief executive of the Kenya Assn. of Air Operators, said the airport fire was enormously damaging to Kenya and the region, particularly with the high tourist season about to begin.

“There will be huge costs. Jomo Kenyatta International Airport is the hub of flight operations from most countries, and airlines cannot abandon their passengers. So they will have to provide alternative transport and accommodation.

“Business will be lost and that brings our economy down,” he said.