Afshar Hospital in Kabul, Afghanistan, is at the forefront of efforts to care for mothers and babies and educate the public. 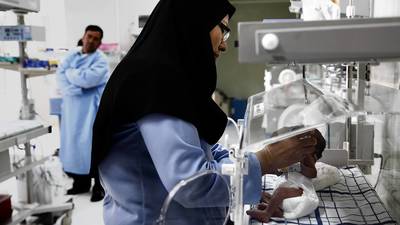 KABUL, Afghanistan — Zainab’s baby was a pale, shrunken figure not much bigger than a man’s hand. He lay on his back, crying softly, unable to suckle. He weighed barely 3 pounds at birth. He was now 7 days old, wheezing from a respiratory infection.

This child of an impoverished Afghan mother almost certainly would have died if his family did not live near Afshar Hospital, where he lay in a fully equipped neonatal nursery, his pencil-thin left leg hooked to a fetal monitor.

The new ward at Afshar, a hospital built and maintained by a nonprofit group based in Fresno, is just the second in Afghanistan to offer modern, high-quality neonatal care. Both are in Kabul, the capital.

“Unfortunately, this baby might not have even reached a hospital, or died on the way,” elsewhere in Afghanistan, Dr. Ghulam Farooq, the hospital director, said over the plaintive cries of three newborns inside incubators in the 12-bed nursery. “And even if he had reached a hospital, we don’t know that he would have received proper care.”

Child and maternal mortality rates in Afghanistan are among the highest in the world. They have improved slightly in recent years, with the Afshar nursery at the forefront of attempts to expand and improve neonatal care and health practices among Afghan women.

The nursery opened Feb. 3. Its first patient, a woman suffering from a high fever, gave birth by caesarean section. The nursery has admitted more than 185 mothers and their babies through May. Patients are provided around-the-clock prenatal and newborn care. Mothers whose infants need specialized care in the neonatal nursery can observe their newborns through a window.

Razia, the mother of a 2-day-old boy who was being treated for sepsis, sat waiting for a nurse to lift the infant from an incubator. Razia, who goes by one name, leaned through the window and gently took the boy. Soon he was nursing at her breast.

Razia said she came to Afshar after two relatives who had given birth at the hospital described its services.

“I was very concerned because I lost one baby [to a miscarriage] and I had my first baby by C-section,” she said. “But here, I was able to have a normal delivery.”

She looked down at the boy as he nursed. “He was very sick, but he’s much better now,” she said.

The funding for the hospital and nursery comes from American Medical Overseas Relief of Fresno, but medical care is provided by Afghans. All 140 staffers are Afghans, Farooq said, including OB-GYN doctors, pediatric specialists, nurses and midwives.

“This is quality medical care — for Afghans, by Afghans,” Dr. Muhammad Amin, head of pediatrics, said as he tended to a 2-day-old baby named Zarhara, who wriggled in an incubator, under treatment for sepsis and spasms. “You would never have seen anything like this a few years ago.”

The hospital opened in 2009, with a focus on treating women and infants, “the two most damaged populations in our country,” Farooq said. Afshar treats about 3,000 outpatients a month and delivers about 165 babies a month, serving five provinces around the capital. More than 130,000 patients have been treated.

It sits on land bought by a group of residents in California’s Central Valley whose family backgrounds included immigration from Islamic countries or fleeing war. They bought the property in 2004 and later decided to build a hospital at a cost of $4 million. American Medical Overseas Relief was formed as a nonprofit in 2008, said Mark Scoffield, a Fresno physician who serves as the group’s chief executive. Funding comes from private donations, he said.

“AMOR is helping all those that it touches understand that a healthy and educated mother raises responsible and caring children,” said Ago Dermenjian, an attorney and board member in Fresno.

Afshar patients who can afford it are charged about $14 for a delivery and the same for a 24-hour stay. Most patients, however, are penniless and pay nothing or a reduced rate, Farooq said.

Every morning, a hospital van loaded with midwives and a portable ultrasound machine travels to one of six makeshift clinics in villages on Kabul’s outskirts. The midwives provide prenatal care and teach basic hygiene and family planning.

Hospital officials have managed to persuade some mullahs and elders to let women visit the hospital and clinics. Some even provided security against attacks by Taliban insurgents.

Meanwhile, midwives have targeted mothers-in-law, who are seen as the behind-the-scenes family power brokers. A husband’s mother wields considerable influence within a typical family.

“We go straight to the mothers-in-law and explain the importance of prenatal care and proper diet, and also family planning,” said Shukria Matin, a midwife who heads the hospital’s community outreach program. “They were against family planning at first, but we’ve been able to persuade many of them.”

The midwives rely on women themselves to convince husbands of the benefits of spacing out births. Many husbands consent not only to birth control for their wives, but also to condoms, Matin said.

In the village of Mehdiya on the edge of Kabul, Matin held up posters before new mothers and pregnant women who had crowded into a mud-walled hut that serves as a clinic. Most village women are illiterate, Matin said, so drawings on the posters help teach basic concepts.

One poster emphasized the importance of regular clinic or hospital visits, depicting women arriving on donkeys or in taxis. Others showed a woman breast-feeding or depicted healthful foods such as grains, fruits and vegetables.

In a clinic a few miles away, several pregnant women watched fetal images on a portable ultrasound monitor. Others, and their children, received immunizations.

Three midwives and a vaccination specialist struggled to move in the crowded room, where women squatted on the floor. The workers raised their voices above the din of crying babies and the insistent bleating of a sheep tied up outside.

Some women walk as long as two hours, children in tow, for their weekly clinic visits — 60 to 70 women most days. Sediqa, 28, walked about 20 minutes, carrying her 7-week-old boy, Besmillah. She came for vitamins and immunizations.

Sediqa, who goes by one name, was married at 14 and delivered her first child at 16, she said. She has three other children, ages 11, 7 and 3. She persuaded her husband to use birth control.

“A lot of women her age might have seven or eight children by now,” Matin said.

In the neonatal nursery at Afshar Hospital, Zainab’s baby was faring better. The monitor showed his vital signs improving.

He was being fed through IV fluids, and there had been a breakthrough, Dr. Amin said as he gently stroked the infant’s fuzzy head: For the first time, the boy was able to breast-feed.