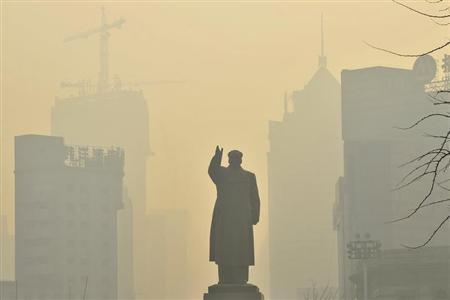 Shi Jianhua, deputy secretary general at the China Association of Automobile Manufacturers (CAAM), did not give details on the new measures and there has been no word from the government.

But the industry group warned the planned restrictions could cut vehicle sales by 400,000 units, equivalent to 2 percent of domestic sales in 2012.

“We shouldn’t simply adopt restrictive policies as they have seriously dampened demand of the people,” Shi told a news conference on Wednesday.

“It’s not good for the healthy development of the Chinese auto industry or the formation of an harmonious auto society.”

Kiyotaka Ise, president of Toyota Motor Corp’s luxury Lexus brand, said he would welcome any measures that give incentives for the purchase of hybrid gasoline-electric cars.

“Given the size of the market, 2 percent is a lot,” he told reporters in Tokyo, referring to the effect on sales of the possible restrictions.

“If the goal is to improve air quality there could be a business opportunity for hybrid cars,” he added. “Perhaps there is a possibility that low-polluting hybrids could be exempt from restrictions.”

In June, sales of German cars accounted for 26 percent of total sales in China, followed by Chinese vehicles at 25 percent, Japanese with 18 percent and U.S. cars with 16 percent, according to CAAM data.

The new curbs will likely include major provincial centers like Chengdu, Chongqing and Wuhan, Shi said.

Details of any restrictions are likely to be announced by city governments. Officials at the Ministry of Transport did not respond to requests for comment.

Analysts said CAAM’s prediction on the possible impact of the new curbs may be an exaggeration and aimed at lobbying the government against such changes.

The new Chinese leadership under president Xi Jinping has made improving the quality of life for Chinese citizens a centerpiece of policy, but stubborn air pollution has become an example of the challenge Beijing faces.

Last month, the State Council, or China’s cabinet, approved a slew of measures to combat air pollution, including accelerating the installation of pollution control equipment on small, coal-fuelled refineries and curbing the growth of high-energy-consuming industries like steel, cement, aluminum, and glass.

The government has made similar promises over the last decade, but enforcement has often been lacking, especially at the local level.

Chinese cities rank among the most polluted in the world, and smog clouds over eastern China, visible from orbit, are easily found online.

Chinese air pollution is driven by many factors, in particular by the country’s dependence on coal-fired power plants, but particulate pollution has been aggravated by a culture that has passionately embraced the automobile as a symbol of status.

The possible restrictions on new vehicle purchases come at a time when automakers are bracing for another tepid year of growth in a market that has been hit by a slowing economy as well as rising fuel costs.

A Beijing-based auto maker executive said this type of sudden surge in restrictions was nothing new in China but admitted that not all firms were ready to deal with it.

“Some of us are on a factory opening binge.” said the executive, who spoke on the condition of anonymity.

General Motors said in April it will add four new plants in the next three years in China to bring its production capacity to 5 million vehicles a year.

“There’s huge risk if companies are not adding manufacturing capacity in China in a measured manner,” the executive said.