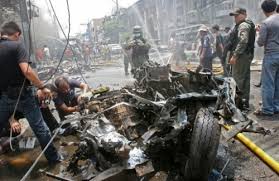 Despite the assaults, National Security Council Secretary-General Paradorn Pattanatabutr said that the discussions between the Thai government and insurgents’ representatives scheduled for April 29 in Malaysia would proceed as scheduled, telling journalists, “Malaysia has confirmed that the talks on April 29 are still on, and its House dissolution and the general election will not have any impact on the arrangement.”

The incidents mostly involved setting tires set ablaze on roads and arson attacks on public properties and mobile-phone signal towers, but in Panare district, guerrillas opened fire on a military outpost with automatic weapons, but caused no injuries, and raided a local electricity office, setting fire to two vehicles, The Nation newspaper reported on Friday.

The two military personnel died when their armored personnel carrier, transporting nine rangers was on its way to the Panare attack when hidden explosives detonated, killing the two rangers and injuring seven others in the blast.