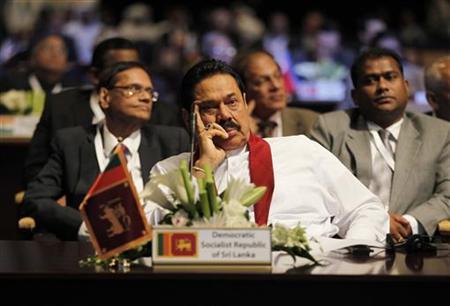 (Reuters) – Sri Lankan President Mahinda Rajapaksa’s ruling party moved a motion in parliament on Thursday to impeach the chief justice for violating the constitution, signaling a deepening rift between the government and the judiciary.

Relations between Shirani Bandaranayake, Sri Lanka’s first woman chief justice, and the government have been deteriorating over recent months.

Her supporters say she has been trying to preserve the independence of the judiciary in a highly politicized environment, and as the government faces international pressure over its human rights record.

“Government members believe that the judiciary is overstepping its limits and (she) violated the constitution,” cabinet spokesman Keheliya Rambukwella told reporters.

He did not elaborate on the accusations against Bandaranayake.

“We handed over the impeachment motion with 117 signatures to the speaker,” Arundika Fernando, a member of Rajapaksa’s ruling United People’s Freedom Alliance (UPFA) told Reuters.

Bandaranayake could be removed with 113 votes in the 225-seat parliament. Rajapaksa’s ruling coalition holds a more-than two-third majority in the assembly.

The president appointed Bandaranayake in May 2011 and her terms could last another 11 years.

She has come under criticism from the government after she ruled against a bill in parliament proposing a budget of 80 billion rupees ($614.20 million) for development.

She said the bill had to be approved by the country’s nine provincial councils, including the former war zone of the northern province, before being approved by parliament.

Bandaranayake’s removal could take several months and Rajapaksa will have to address parliament to give reasons for the impeachment.