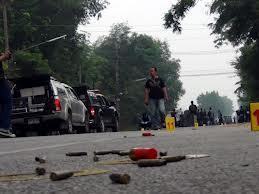 PATTANI, Thailand (AP) — Suspected insurgents have beheaded and burned the body of a Muslim man on a rural road in Thailand’s violence-prone south.

The man has been identified as 57-year-old Tuanda-oh Tuansulong, a grocery shop owner. His head was found in the bush near his truck.

Zulkiflee says investigators believe at least four suspected militants pulled over the victim’s car and attacked him as he was on his way to a hospital for a medical appointment.

More than 5,000 people have been killed in Thailand’s three southernmost Muslim-dominated provinces since an insurgency erupted in 2004.

via News from The Associated Press.