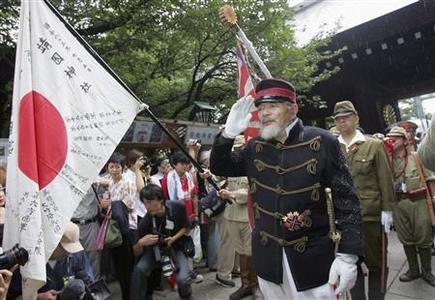 The three countries are linked by deep economic ties, while Japan and South Korea are close allies of the United States.

But as Japan marks the 67th anniversary of the end of the war and its colonization and occupation of its neighbors on Wednesday, a decades-old feud with Seoul over disputed rocky isles turned acrimonious after South Korean President Lee Myung-bak visited the territory last week.

A row with China over islands in the East China Sea has also heated up, while attention is focused on whether members of Prime Minister Yoshihiko Noda’s cabinet will violate his stance against paying homage at Yasukuni Shrine for war dead on Wednesday, seen by many as a symbol of Japan’s past militarism.

The dynamics of Japan’s relations with its two Asian neighbors differ — Tokyo frets over China’s growing military and economic clout while seeking closer security ties with South Korea. But the twin feuds reflect the degree to which the hand of history lies heavily on the region, becoming entangled with modern political pressures.

“Japan has never convinced its neighbors that it has really repented,” said Columbia University professor Gerry Curtis, noting persistent skepticism in Beijing and Seoul over Tokyo’s repeated apologies for excesses during its occupation of large parts of China and colonization of the Korean peninsula.

“And neither China nor South Korea want to let the issues go because they are a way to get political advantage.”

The dispute with Seoul even intruded into the Olympics when a South Korean soccer player raised a placard saying “Dokdo is our territory” — referring to the islands Japan calls Takeshima — after beating Japan for a bronze. He had to skip the medal ceremony for breaking a rule against politicizing the Games.

“All of this goes back to the fact that there is an absence of shared vision about the past in this part of the world,” said Andrew Horvat, director of the Stanford Center in Kyoto.

In 1993 Japan issued a statement in the name of then-chief cabinet secretary Yohei Kono apologizing and two years later set up a private fund to make payments to the women, but South Korea say those moves were not official and therefore not enough.

Domestic political pressure in June forced Seoul to postpone signing an agreement with Japan to share sensitive military information, a step favored by Washington as well to improve the ability of its two allies to deal with regional threats.

Analysts say that faced with flagging support and a presidential election in December to pick a successor, Lee was seeking to tap into the anti-Japanese sentiment never far from the surface with his high-profile visit to the island.

“Japan is not seen by a majority of the Koreans as an ally, real or potential — in spite of all rational strategic considerations,” said Andrei Lankov, a Korea expert at South Korea’s Kookmin University. “Very often, the Japan-bashing becomes a way to show one’s patriotic credentials, a good tactic for enhancing local support.”

Noda, whose own popularity ratings have tanked and who may have to call an election his party is likely to lose within the year, is also under domestic pressure to take a tough stance although Columbia’s Curtis said his response has been measured.

Tokyo has recalled its envoy and threatened to take the island feud to the International Court of Justice, a largely symbolic move since Seoul’s agreement is needed to open the case.

Despite the strains, the Japan-South Korea spat over the islands, which may be near potential gas reserves, looks unlikely to spiral into a military confrontation, analysts say.

Managing the feud with China over disputed islands near potentially huge oil and gas reserves could be tougher at a time when China — where memories of Japan’s military occupation run deep — faces a once-in-a-decade leadership change and Japan worries about its rival’s rising regional and global clout.

Tension over the uninhabited islands, known as the Senkaku in Japan and the Diaoyu in China, has heightened since Noda said last month the government was considering buying them from their private owners rather than let Tokyo Governor Shintaro Ishihara, a harsh critic of China, proceed with a similar purchase plan.

A vessel carrying Hong Kong activists seeking to assert China’s sovereignty was headed for the islands and scheduled to land on Wednesday, a Hong Kong legislator said. A Japanese nationalist group plans a weekend trip to the vicinity.

Analysts said the risk of a clash can’t be ruled out, but added that deep economic ties between Asia’s two biggest economies — trade between China and Japan grew 14.3 percent in 2011 to a record $345 billion — would likely keep tempers in check.

“There is so much at stake in the relationship in terms of economics,” said the Stanford Center’s Horvat.