(Reuters) – Earlier this month, Iran’s national police chief ventured boldly into what has become known as the country’s “chicken crisis.” The feathers haven’t stopped flying since. 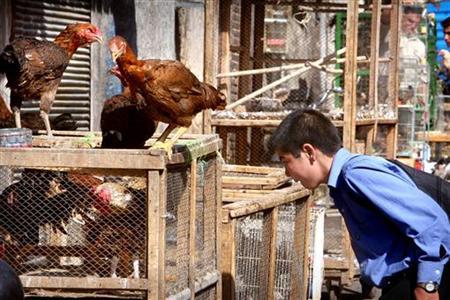 The soaring price for a staple food that Iranians relish cooked with saffron, plums or pomegranates has become such a hot topic of public debate, and a sign of the sinking purchasing power of many Iranians, that Police Chief Esmail Ahmadi Moghaddam felt it his duty to intervene.

“Certain people witnessing this class gap between the rich and the poor might grab a knife and think they will get their share from the wealthy,” Mehr news agency quoted him as saying.

As far as is known, no one has gone to that extreme, but as Iran’s economy struggles with erratic government management and international sanctions imposed over the country’s disputed nuclear program, prices of food and fuel have jumped across the board in the past 18 months.

At around 65,000 rials, or over $5 at the official exchange rate, a kilo (2.2 lb) of chicken is now nearly three times the price it was a year ago. That makes it hard to afford for many in a country where gross national income per capita was about $4,520 in 2009, or $377 per month, according to the most recent estimate by the World Bank.

The surge in the price is mainly due to the exorbitant cost of importing chicken feed with Iran’s weakened currency, which on the black market is more than 40 percent lower against the U.S. dollar than it was at the start of this year.

With chicken becoming rarer on middle- and working-class dinner tables, many Iranians are expressing their frustration with mordant humor.

Iranian cartoonist Mana Neyestani, who lives in France, mocked Ahmadi Moghaddam’s warning with a cartoon of a young man watching a pornographic film. His father tries to cover up only the image of a roast chicken in the background of the film, saying: “How many times have I told you not to watch films with chicken in them?”

Photographer Arash Ashoorinia published on his website a range of images showing delectable chicken dishes. “It’s possible that publishing these kinds of photos will be banned. Of course I had many more beautiful photos, but I wouldn’t want to act against national security!” he wrote underneath.

Iran’s social networks are buzzing. “There are two classes of people: below the chicken line and above the chicken line,” quipped one Twitter posting from a Shiraz resident.

Another tweet joked that instead of asking for traditional gold coins, soon-to-be-married Iranian women would request dowries of 200 tonnes of chicken.

Officials, worried about popular resentment, have done their best to assure irate Iranians that chicken will be in plentiful supply and at fair prices.

There have been widely announced fines for those found to be profiteering, proclamations on the provision of government-subsidized chicken for the holy month of Ramadan, and reassurances that tonnes of healthy stock will soon be available at market.

Pictures of queues of people hoping to buy government-subsidized chicken have been widely carried in state-influenced Iranian media in the last several weeks – apparently to demonstrate that the government is addressing the problem.

Officials maintain Iran has endured more than three decades of economic sanctions and can withstand plenty more. Some government figures, including President Mahmoud Ahmadinejad, have described the sanctions as a blessing that will wean the country off foreign goods and dependence on oil income.

But for now, at least, Iran’s chicken industry remains dependent on the outside world. Much of the soya beans and corn fed to broiler chickens is imported from abroad.

Talking to Reuters by telephone, a veteran chicken producer in Iran, who asked not to be named, blamed the price rises on government mismanagement as well as the sanctions.

“Around half the chicken farms have stopped production because it has become too expensive to buy the imported raw materials,” he said, citing the sharp increases in the cost of feed and imported vaccines.

“We are so sorry about the situation but it’s impossible to bring the price down. It’s very upsetting for so many Iranians.”

With opposition activity in Iran tightly controlled, the chicken crisis, and the country’s general economic distress, look unlikely for now to prompt wide protests that could challenge the government’s hold on power.

But the price of chicken has become an issue in national politics, where some anti-Ahmadinejad members of parliament are publicly denouncing rivals in the executive branch for failing to prepare for the crisis.

“Livestock and poultry dealers gave warnings eight months ago about the lack of hay and feed,” said Ali Larijani, head of Iran’s parliament and a rival to Ahmadinejad, according to the Iranian Students’ News Agency.

Ahmadinejad has faced increasing criticism over his economic record since introducing reforms in 2010 that withdrew generous subsidies to nearly all Iranians in favor of cash handouts; the reforms have contributed to inflation.

Although the government’s policy of supplying subsidized chicken has partially eased the problem, as a public relations gesture it risks backfiring by reminding some Iranians of the worst days of the economy during the devastating Iran-Iraq War of the 1980s.

“There are queues for chicken every day,” said Ayhan, a university professor living in Tehran. “It reminds me of 1981.”