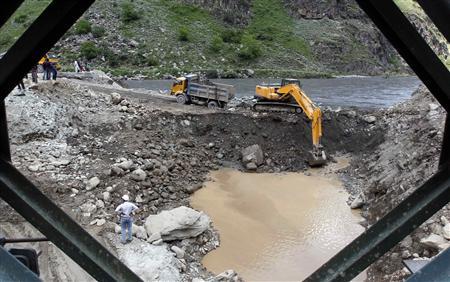 KANZALWAN, India-Pakistan Line of Control, July 23 (AlertNet) – As the silver waters of the Kishanganga rush through this north Kashmir valley, Indian laborers are hard at work on a hydropower project that will dam the river just before it flows across one of the world’s most heavily militarized borders into Pakistan.

The hum of excavators echoes through the pine-covered valley, clearing masses of soil and boulders, while army trucks crawl through the steep Himalayan mountain passes.

The 330-MW dam is a symbol of India’s growing focus on hydropower but also highlights how water is a growing source of tension with downstream Pakistan, which depends on the snow-fed Himalayan rivers for everything from drinking water to agriculture.

Islamabad has complained to an international court that the dam in the Gurez valley, one of dozens planned by India, will affect river flows and is illegal. The court has halted any permanent work on the river for the moment, although India can still continue tunneling and other associated projects.

In the years since their partition from British India in 1947, land disputes have led the two nuclear-armed neighbors to two of their three wars. Water could well be the next flashpoint.

“There is definitely potential for conflict based on water, particularly if we are looking to the year 2050, when there could be considerable water scarcity in India and Pakistan,” says Michael Kugelman, South Asia Associate at the Woodrow Wilson International Center for Scholars in Washington.

“Populations will continue to grow. There will be more pressure on supply. Factor in climate change and faster glacial melt … That means much more will be at stake. So you could have a perfect storm which conceivably could be some sort of trigger.”

It’s not just South Asia — water disputes are a global phenomenon, sparked by growing populations, rapid urbanization, increased irrigation and a rising demand for alternative power such as hydroelectricity.

Turkey, Syria, Iran and Iraq quarrel over the waters of the Tigris and Euphrates. The Jordan river divides Israel, Jordan, Lebanon and the West Bank. Ten African countries begrudgingly share the Nile.

In Southeast Asia, China and Laos are building dams over the mighty Mekong, raising tensions with downstream nations.

A “water war” is unlikely in the next decade, it said, but beyond that rising demand and scarcities due to climate change and poor management will increase the risk of conflict.

That threat is possibly nowhere more apparent than in South Asia, home to a fifth of humanity and rife with historical tensions, mistrust and regional rivalries.

The region’s three major river systems – the Indus, the Ganges and the Brahmaputra – sustain India and Pakistan’s breadbasket states and many of their major cities including New Delhi and Islamabad, as well as Bangladesh.

“South Asia is symbolic of what we are seeing in terms of water stress and tensions across the world,” says B.G. Verghese, author and analyst at New Delhi’s Centre for Policy Research.

The region is one of the world’s most water-stressed, yet the population is adding an extra 25 million people a year – South Asia’s per capita water availability has dropped by 70 percent since 1950, says the Asian Development Bank.

The effect of climate change on glaciers and rainfall patterns may be crucial.

“Most of the water that is used in Pakistan comes from glacial melt or the monsoon,” says Rafay Alam, an environmental lawyer and coordinator of the water program at Lahore University of Management Sciences.

The dry months of June-July offer a snapshot of the extreme water crisis in the region.

Hospitals in New Delhi this year cancelled surgeries because they had no water to sterilize instruments, clean operating theatres or even wash hands. Swanky malls selling luxury brands were forced to switch off air conditioners and shut toilets.

In Pakistan, the port town of Gwadar ran out of water entirely, forcing the government to send two naval water tankers. Some government flats in the garrison city of Rawalpindi have not had water for weeks, said the local press.

India, as both an upper and lower riparian nation, finds itself at the centre of water disputes with its eastern and western downstream neighbors — Bangladesh and Pakistan — which accuse New Delhi of monopolizing water flows.

To the north and northeast, India fears the same of upstream China, with which it fought a brief border war in 1962. Beijing plans a series of dams over the Tsangpo river, called the Brahmaputra as it flows into eastern India.

For India, damming its Himalayan rivers is key to generating electricity, as well as managing irrigation and flood control. Hydropower is a critical part of India’s energy security strategy and New Delhi plans to use part of it to reach about 40 percent of people who are currently off the grid.

A severe power shortage is hitting factory output and rolling outages are routine, further stifling an economy which is growing at its slowest in years.

India’s plans have riled Bangladesh, which it helped gain freedom from Pakistan in 1971. Relations cooled partly over the construction of the Farakka Barrage (dam) on the Ganges River which Dhaka complained to the United Nations about in 1976. The issue remains a sore point even now.

More recently, Bangladesh has opposed India’s plans to dam the Teesta and Barak rivers in its remote northeast.

But India’s hydropower plans are most worrying for Pakistan.

Water has long been a source of stress between the two countries. The line that divided them in 1947 also cleaved the province of Punjab, literally the land of five rivers – the Sutlej, Beas, Ravi, Chenab and Jhelum, all tributaries of the Indus – breaking up millenniums-old irrigation systems.

“Pakistan is extremely worried that India is planning to build a whole sequence of projects on both the Chenab and Jhelum rivers … and the extent to which India then becomes capable of controlling water flows,” says Feisal Naqvi, a lawyer who works on water issues.

In recent years, political rhetoric over water has been on the rise in Islamabad, and militant groups such as the Lashkar-e-Taiba have sought to use the issue to whip up anti-India sentiments – accusing New Delhi of “stealing water”.

India brushes off such fears as paranoia and argues the dams won’t consume or store water but just delay flows, in line with a 1960 treaty that governs the sharing of Indus waters between the two countries.

South Asia’s water woes may have little to do with cross-border disputes, however. Shortages appear to be rooted in wasteful and inefficient water management practices, with India and Pakistan the worst culprits, experts say.

“All these countries are badly managing their water resources, yet they are experts in blaming other countries outside,” says Sundeep Waslekar, president of Strategic Foresight Group, a Mumbai-based think-tank.

“It would be more constructive if they looked at what they are doing at home, than across their borders.”

Their water infrastructure systems, such as canals and pipes used to irrigate farm lands, are falling apart from neglect. Millions of gallons of water are lost to leakages every day.

The strain on groundwater is the most disturbing. In India, more than 60 percent of irrigated agriculture and 85 percent of drinking water depend on it, says the World Bank. Yet in 20 years, most of its aquifers will be in a critical condition.

Countries must improve water management, say experts, and share information such as river flows as well as joint ventures on dam projects such as those India is doing with Bhutan.

“Populations are growing, demand is increasing, climate change is taking its toll and we are getting into deeper and deeper waters,” says Verghese, author of ‘Waters of Hope: Himalayan-Ganga cooperation for a billion people’.

“You can’t wait and watch. You have to get savvy and do something about it. Why get locked into rhetoric? We need to cooperate. Unless you learn to swim, you are dead.”