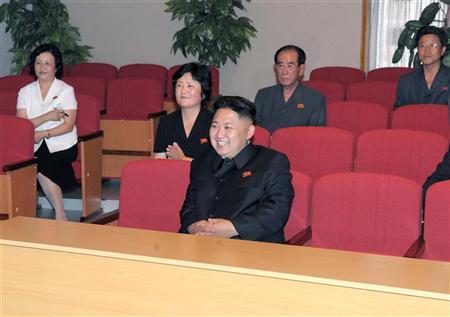 (Reuters) – Impoverished North Korea is gearing up to experiment with agricultural and economic reforms after young leader Kim Jong-un and his powerful uncle purged the country’s top general for opposing change, a source with ties to both Pyongyang and Beijing said.

The source added that the cabinet had created a special bureau to take control of the decaying economy from the military, one of the world’s largest, which under Kim’s father was given pride of place in running the country.

The downfall of Vice Marshal Ri Yong-ho and his allies gives the untested new leader and his uncle Jang Song-thaek, who married into the Kim family dynasty and is widely seen as the real power behind the throne, the mandate to try to save the battered economy and prevent the secretive regime’s collapse.

The source has correctly predicted events in the past, including North Korea’s first nuclear test in 2006 days before it was conducted, as well as the ascension of Jang.

The changes could herald the most significant reforms by the North in decades. Previous attempts at a more market driven economy have floundered, most recently a drastic currency revaluation in late 2009 which triggered outrage and is widely believed to have resulted in the execution of its chief proponent.

“Ri Yong-ho was the most ardent supporter of Kim Jong-il’s ‘military first’ policy,” the source told Reuters, referring to Kim Jong-un’s late father who plunged the North deeper into isolation over its nuclear ambitions, abject poverty and political repression.

The biggest problem was that he opposed the government taking over control of the economy from the military, the source said, requesting anonymity to avoid repercussions.

North Korea’s state news agency KCNA had cited illness for the surprise decision to relieve Ri of all his posts, including the powerful role of vice chairman of the ruling party’s Central Military Commission, though in recent video footage he had appeared in good health.

Ri was very close to Kim Jong-il and had been a leading figure in the military. Ri’s father fought against the Japanese alongside Kim Jong-il’s late father Kim Il-sung, who founded North Korea and is still revered as its eternal president.

The revelation by the source was an indication of a power struggle in the secretive state in which Kim Jong-un and Jang look to have further consolidated political and military power.

Kim Jong-un was named Marshal of the republic this week in a move that adds to his glittering array of titles and cements his position following the death of his father in December. He already heads the Workers’ Party of Korea and is first chairman of the National Defence Commission.

The North Korean Embassy in Beijing, reached by telephone, declined to comment.

Some North Korea experts said the comments confirmed their belief that the new leadership would try to make some changes to the stultifying controls over the economy.

“This should not come as a surprise. Kim Jong-un appears to have done considerable study on this (reform), taken a lot of lessons, and is probably trying to mould it in a way that suits their situation and in a way that blends with the existing policy. Ri’s departure has a lot to do with this process,” said Korea University professor Yoo Ho-yeol, speaking from Seoul.

He predicted that Jang would increasing press ahead with joint-venture projects with China, the only major ally to which the North can turn for economic help.

“You can see this from the repeated criticisms of reform and opening up that appear in the Rodong Sinmun (North Korean party newspaper). They openly criticize any moves in this direction. North Korea is quite indignant when it comes to this point.”

A North Korea’s cabinet has created a “political bureau” designed to wrest power from the 1.2 million-strong military in order to run the economy, which has been in shambles after a crippling famine in the 1990s, the source said.

“In the past, the cabinet was empty with no say in the economy. The military controlled the economy, but that will now change,” the source said.

Kim Jong-un has set up an “economic reform group” in the ruling Workers’ Party to look at agricultural and economic reforms, the source said, adding that North Korea will learn from its giant neighbor and solitary benefactor, China.

Beijing leaders are thought to have been pressing Pyongyang to do more to reform the economy, worried that a collapse of the North could send refugees streaming across its border, and cause the loss of a strategic buffer to South Korea and the large contingent of U.S. troops which help protect it.

It was unclear who will head the cabinet’s “political bureau” and the party’s “economic reform group”, but change was inevitable, the source said.

In sharp contrast to the austere, reclusive image of his father, state media have shown Kim Jong-un visiting fun fairs, speaking in public and applauding at a rock concert.

Women appear to have been given more freedoms, including wearing short skirts, although 200,000 people are in prison camps in the impoverished and isolated country.

The source dismissed speculation of any political fallout from the purge, saying: “Kim Jong-un and Jang Song-thaek are in control of the military.”

Jang has long been seen as a proponent of reform of an economy which through mismanagement has entirely missed out on the fruits of dramatic growth of neighbors like China and South Korea.

His push for reform was widely seen as having triggered a period of exile but he was later rehabilitated and given the primary role of supporting Kim Jong-il’s son when he was being groomed to eventually take over the leadership.

North Korea has yet to name Ri’s replacement as head of the army, the source said.

It was unclear how many of Ri’s men have been sacked, but the source said they have not been jailed. An assessment of the changes by the South Korean government seen by Reuters, said that some 20 top officials had been purged since Kim Jong-un began his ascent to power.