After years of denying the prevalence of illegal alcohol in Iran, officials are addressing the issue, while continuing to treat drinking as a sin and a crime. 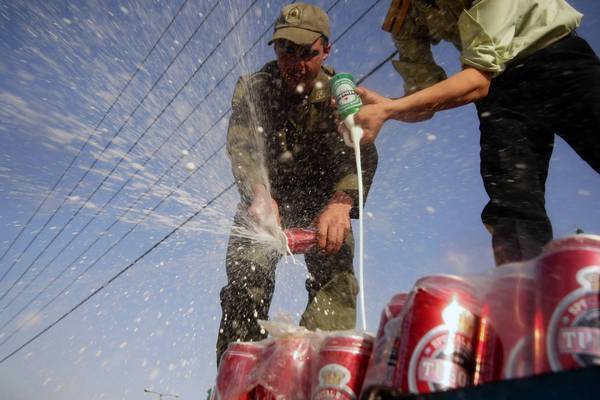 TEHRAN — On most days, Mohsen can be found driving around the capital in his old Peugeot with a hired female relative, trying to pass himself off as a father shopping with his daughter.

But the errands he’s running involve delivering homemade beer and wine or smuggled vodka and whiskey to customers across the city. He doesn’t work nights; that’s when the country’s moral police set up checkpoints to catch bootleggers like him.

If arrested, the 59-year-old former high school teacher faces jail, thousands of dollars in fines and possibly lashings for flouting the Islamic Republic’s blanket ban on drinking, which is prohibited under Islam. Meanwhile, his customer base continues to grow.

After years of being in public denial over the amount of illegal drinking in the country, officials in Iran are for the first time publicly addressing the issue of alcoholism and the health problems drinking can cause, exacerbated by sometimes dangerous homemade brews.

“We sometimes get reports from hospitals and doctors on the consumption of alcohol from neighborhoods in the south of Tehran; low-income and traditional walks of people live there, which is worrying,” Deputy Health Minister Baqer Larijani said in May.

In his comments — the first time such a high-ranking government official had acknowledged widespread drinking in Iran — Larijani, whose brother is the country’s powerful parliament speaker, said alcoholism now merits more attention than diabetes or heart disease.

And last month, at a ceremony marking the International Day Against Drug Abuse and Illicit Trafficking, Health Minister Marzieh Vahid Dastjerdi announced, “We have prepared a road map to treat alcoholism and reduce the consumption of alcoholic beverages in the society.”

But even as officials acknowledge the problem, the government continues to treat drinking as a sin and a crime.

Recently, two men in a northeastern province were given rare death sentences for drinking, as part of the country’s three-strikes law. Each man had been convicted of drinking twice before.

Amnesty International urged Iranian authorities to drop the death sentences, saying, “Alcohol consumption cannot reasonably be classified as one of the ‘most serious crimes,’ the internationally agreed minimum standard for capital crimes.”

“They are making examples out of a few to show they are serious about the infractions,” said Mehdi Semati, author of “Media, Culture and Society in Iran: Living With Globalization and the Islamic State.”

More than 200,000 people in Iran are estimated to be involved in bootlegging, and about $800 million is spent annually on smuggling. The country’s leading economic newspaper this year quoted border police as saying that the amount of confiscated alcohol had risen 69% in the last year.

Iran has also long had a serious problem with opium and heroin addiction, with official statistics putting the number of addicts at 1.2 million, a number some call conservative. In Iran, drinking is commonly used as a method to try to break drug addiction.

The increase in alcohol use has political ramifications for the Islamic leadership, said Hosein Ghazian, a sociologist and visiting scholar at Syracuse University.

“If a lot of people use alcohol, it means the people are not as Islamic as the government says, so why should they tolerate an Islamic government?” Ghazian said.

The government’s reluctance to openly discuss Iranians’ drinking habits — even clerics avoid preaching on the topic in Friday sermons — stems from the belief or eagerness to pretend that Iran’s forcefully imposed theocracy is prevailing and only a minority of people are not practicing Muslims.

“These are real social problems, these are not just ideological issues,” Semati said. “In some ways it’s an admission of the failure of the government … to regulate all aspects of social life, where young people and older people would be willing to live by the code of the state of the Islamic Republic.”

In Iran, drinking has long been a deeply rooted part of Persian society, from the upper-class elite who hold discreet parties in their Tehran apartments to the blue-collar workers who drink the sometimes toxic homemade brews. The Islamic Revolution in 1979 attempted to squelch the custom, as part of a greater effort to erase the Persian culture in favor of an Islamic one, Semati said.

Part of the culture that thrived before the revolution celebrated the lifestyle of working-class machismo epitomized in popular action films.

Today, young people are increasingly turning to alcohol as an escape from their lives, which they feel are boxed in politically, socially and economically.

“Young people express that they can’t go where they want to go and do what they want to do, and sometimes those things are mundane, like gathering in a park and listening to music,” Semati said. “So when all those doors are closed, they will do what they can to create their own leisure time and live a life that is free of constraints by the government.”

Mohammad Majidi, a doctor who works in several Tehran clinics, says that each day he sees half a dozen young patients who come in with fatty liver, hypertension and intestinal ailments. He treats and releases them, knowing they might soon return, and lists their illnesses as something other than alcohol-related, to protect them from possibly being branded as criminals.

“I only warn them, but I do not think they take my advice to stop drinking,” Majidi said.

Alcohol’s health toll in Iran is worsened because many people can’t afford to buy what’s smuggled in. A bottle of French wine can go for about $40, whereas a bottle of Iran-made alcohol sells for less than $6.

Many rely on what’s made in people’s basements or gardens in unsanitary conditions. While drinking or making the alcohol, people have suffered from alcohol poisoning, blindness or death. The alcohol content of the homemade liquor is often higher than normal, supplemented with drugs or contaminated.

When Shahin, a sociologist whose clients are often young people who binge-drink, talks to his patients, he stays away from religious precepts and instead speaks to them in terms of the dangers to mind and body.

“The religious education at home and at schools has obviously failed,” said Shahin, who asked that his last name not be used.

In the absence of other forms of leisure and amusement, he said, “drinking alcoholic beverages is a way to vent your disappointment at the country’s injustice, lack of jobs and decent life and future, and political disappointment.”