As many as 90% of urban youth in China are nearsighted. Researchers think they can fight myopia by forcing youngsters to put down their books and expose their eyes to natural light. 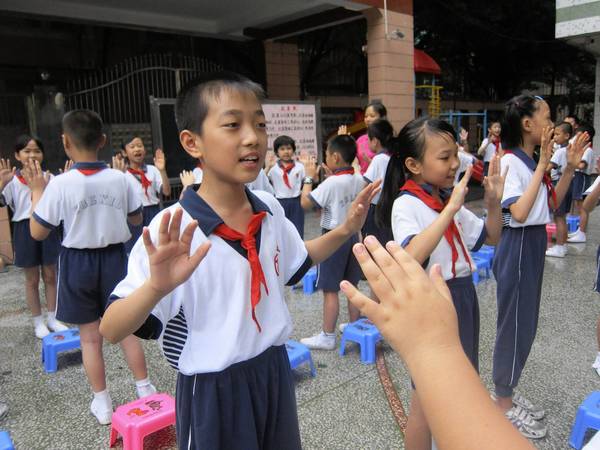 GUANGZHOU — The children at the Bayi Xiwang elementary and middle school are doing something revolutionary by current Chinese standards: They’re playing outside.

Singing and skipping in the dizzying southern Chinese humidity, these students have been given 45 minutes a day to frolic under the sun while peers across the nation remain indoors, hunched over books or squinting at blackboards.

By forcing youngsters to put down their pencils and expose their eyes to natural light, researchers think they can stem an explosion of nearsightedness in China.

By the time they complete high school, as many as 90% of urban Chinese youth are afflicted by the condition known as myopia, in which close objects can be seen clearly but things just a few feet or inches away start to blur.

That’s about three times the rate among U.S. children. Even more troubling is the severity of the Chinese cases. Between 10% and 20% of nearsighted Chinese children are expected to develop “high myopia,” which is largely untreatable and may lead to blindness.

“The problem for China is really quite massive,” said Ian Morgan, a visiting professor at the Zhongshan Ophthalmic Center at Sun Yat-sen University who helped organize the three-year clinical trial in Guangzhou. “Their best-educated kids — kids who are going to be the intellectuals or political leaders — are going to be progressively losing vision as they get older.”

The epidemic has provided optical companies with an opportunity to serve a need — and to cash in.

China’s market for spectacles and contact lenses is expected to double to $5.3 billion this year from just four years ago, according to Euromonitor International, a consumer research firm.

Many new shopping malls feature a floor dedicated to eyewear where anyone can buy the latest Prada or Hugo Boss frames. Getting lenses measured and fitted can take as little as an hour.

For those on a budget, state-owned optical shops can still be found in any city charging as little as $10 for a new pair of glasses.

China has also become one of the world’s fastest-growing markets for foreign contact lens makers. Although U.S. sales have flattened, Bausch & Lomb estimates the overall market in China will grow 10% to 15% a year for ordinary vision-correcting lenses, and 20% to 30% annually for cosmetic lenses that enable users to change the color of their pupils or give the appearance of larger eyes.

“The market will grow since contact lens penetration rates in China are much lower than the rest of the world,” said Ian Dolling, business unit director for Bausch & Lomb in Shanghai. “As the economy develops, more people can afford to purchase contact lenses.”

The same can be said for laser corrective surgery, which was introduced to China in the mid-1990s and has grown steadily to 1 million procedures a year.

Experts remain divided on how much genetics is to blame for China’s struggle with myopia. Scientists have found more than two dozen genes linked to the problem, especially for the most severe forms of the condition. Children whose parents have myopia are also more likely to develop nearsightedness.

But Morgan, an Australian, is trying to prove its origins are largely environmental and linked to schooling. Nearsightedness is rampant in the Asian Tiger economies of Hong Kong, Taiwan and Singapore where academics are similarly rigorous, even among children who aren’t ethnic Chinese. For example, research has shown that students of Indian ancestry living in Singapore have rates of myopia eight to nine times higher than their peers living in India, Morgan said. Myopia is also prevalent in Orthodox Jewish schools where reading requirements are intense.

Fishing for older records in China, Morgan and his colleagues found studies that showed the condition affected about 20% to 30% of young adults in Guangzhou in the early 1970s, near the end of Mao’s violent Cultural Revolution. Schools and universities were closed, intellectuals purged. Some victims were targeted for merely wearing spectacles.

But today, students are more dependent on glasses than ever. Myopia has steadily increased in concert with China’s urbanization and intensified academic competition. It’s not uncommon for children in China to study four hours a day at home on top of a full day of school as well as attend several hours of tutoring on weekends.

“Parents want their kids to get into the best primary school so they can have a better chance at the best high school that can help them get into Beida, Tsinghua and Fudan,” Morgan said, referring to China’s three elite universities. “Educational pressure and the disappearance of a strong preventive agent — time outdoors — is driving kids to myopia.”

Even China’s authoritarian leaders have had to ask schools to ease off. In 2010, several provinces banned public preschools from instructing 3-year-olds to memorize 10 Chinese characters a day.

Beijing restaurateur Wang Jiali said she’s convinced that too much studying ruined her eyesight. Growing up in Jianyang in western Sichuan province, she studied in a classroom from 7:30 a.m. to 6:30 p.m., followed by four hours of homework under poor home lighting.

By age 11, Wang strained to read the blackboard. By age 12, she was wearing her first pair of glasses — a pair of cheap red frames whose lenses cracked twice in the first three months. She hated the glasses instantly and feared they would make her eyes bulge.

“I worried I was going to get goldfish eyes,” said Wang, now 32 and part-owner of an American-style grill in Beijing.

“The first thing I did was watch ‘American Idol,'” Wang said. “I was so excited I could see properly.”

Despite a 2007 order by Chinese authorities to boost physical education in schools to combat obesity and deteriorating eyesight, many educators — and parents — have resisted. Morgan and fellow researchers at the Zhongshan Ophthalmic Center had to negotiate hard to persuade six schools to allow students a daily recess break. (Another six signed on as “control” groups, making no changes to their routines.)

Morgan wanted more than an hour of outdoor exercise a day. The schools agreed to 45 minutes and structured lessons in the open air, sometimes with singing, dancing and the occasional hula hoop.

“We roll out a blackboard onto the playground and create situations where the students can practice English with each other or draw outside,” said Wang Xiaojia, Bayi Xiwang’s principal.

The researchers acknowledge this may be as close as they get to giving young Chinese eyes a break.

“If your prescription at the end of the day is making Chinese care less about education, then it’s not going to happen,” said Nathan Congdon, a professor at the Zhongshan Ophthalmic Center. “That’s like telling Americans to like basketball or football less.”